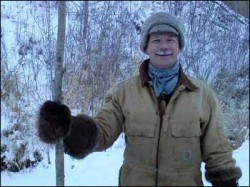 I make a living in wildlife control or what we call animal damage control. I’ve been trapping…well, I’ve been around it all my life, but I’ve been doing it as a profession for ten years. The company I work with handles wildlife conflict problems throughout the province.

The job is varied.  It could be something like dealing with a weasel or ermine that’s found its way into a chicken coop and has taken up a life of killing chickens. It is often beaver control. Beaver are extremely overpopulated and do a lot of damage in this province so we do a lot of that work. Coyote control, especially in the spring and the fall, and sometimes I’ll be up in the north tracking wolves that are killing somebody’s livestock.

I have always been involved in the outdoors and animals have always fascinated me. Unfortunately, we’ve got animals such as beavers or coyotes that have learned to live in and around urban areas.  They do really well at raising their young so the mortality rate is not near what it is with a lot of other animals that are trying to deal with loss of habitat.  And they’ve got themselves into quite a bit of conflict with people.  At the same time, cities and developed areas trying to deal with wildlife really need someone who understands wildlife.  When I started, I was absolutely amazed at some of the things that were being done to rid wildlife problems. Things like destroying beaver dams, at tremendous cost, that were re-built within days, or destroying food caches or re-locating animals causing them to starve and poisoning animals that they didn’t know how to deal with.

It was horrible and there was a real need for somebody to come in and not only deal with the problems but to train other people on some more humane methods.  There is a time and place to be doing this kind of work, not only taking the animals out but being very careful of what time of year that is done – for instance, not when the animals are having their young and those young are dependent. So it’s often a balancing act to deal with situations where people are mad or upset or there are safety issues and with what is the most effective and the most humane.