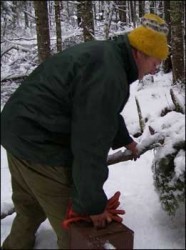 I’m a retired provincial wildlife biologist, retired fur farmer and active trapper. It was my interest in furbearers that brought me into the wildlife biology field. I started trapping when I was 10 and you could say trapping and furbearers have been a part of my whole life.

I started getting involved with research projects in 1998. I live trap otters and not many people have the ability to live capture them. I have live captured otters for the trap testing research in Alberta. I also captured otters for telemetry (electronic tracking) studies for Acadia University. I’m now involved in measuring the expansion of the martin population that have been reintroduced to my region of the province.  We do that by monitoring their tracks and by setting up bait stations with sticky tape to collect hair samples so we don’t need to capture or tag the animals.

In the winter of 2008 I took part in a martin reintroduction program in Cape Breton Highlands National Park with a trapper friend I have up in northern New Brunswick. His area has an abundant martin population that are genetic cousins to the few that are still left in Cape Breton.  Together he and I captured 50 animals in a little more than two weeks.  We used specially designed cage traps that simulate the martin’s natural nest. We fed and cared for them until they were picked up, usually every two or three days, either by helicopter or truck and taken to Cape Breton.  There they were gradually introduced to their new surroundings.

The reintroduction is necessary because the forest there was devastated by spruce budworm. The native martin population, which depends on the trees, has become endangered with only 25-30 animals left. Now that the forest is starting to come back, it is hoped the reintroduction program there will be as successful as it has been in my area of Nova Scotia.

The trapper experience and knowledge is very important and helpful to these projects. They say there are three rules of trapping: ‘location, location, location’.  It’s not a simple matter of putting out a trap with bait in it. You have to know where the animal is going to come by, that’s the whole secret with trapping whether it’s for fur and food or for wildlife management.