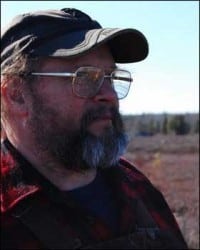 I came into this position in the fall of 1995. When I came here both lynx and martin were primarily restricted to Cape Breton Island. In the mid-seventies there was a decision by Parks Canada to reintroduce martin in Kejamkujik national park. They were brought into the park from New Brunswick and we think that these animals dispersed into surrounding areas so today there is a pocket of martin at the bottom end of the province. There’s still martin in the park, they’re not doing hugely well but they are there.

When we started hearing in the mid 90s that hunters and trappers were finding martin in the area, we contacted one specific trapper who was instrumental in helping us locate and study the population.  His own knowledge plus that of local trappers allowed us to very quickly home in on the area and he connected us to the people in the area who we needed to work with to protect that population. He received a stewardship award from Habitat Canada which was well deserved because without his involvement we would not have been able to learn as much as we have about this emerging population.

In Nova Scotia trappers must submit harvest report cards to my department each season.  These are an important source of statistical information about animals that are harvested. Trappers also contribute to conservation efforts not just through their report cards but they supply us with carcasses from furbearers.  By examining carcasses we can determine other aspects of population stuff for management; like age structure of the population, reproductive performance  – to give us a baseline of that year’s birth rates, that kind of thing. Compliance is very high. Most trappers go to the extra work of bringing them to us.

What we find with fur harvesters is that they tend to have a higher understanding of what’s going on with the critters that they harvest just because it’s a little different than other types of hunting. You have to understand what the animals are doing, where they are and where to set your traps to be successful. What we are trying to do is to get some idea of the extent of martin in this area. We are watching that situation. They are already protected. No one is allowed to harvest them and we may or may not add them to the harvest list. It really depends on whether or not there is a benefit to listing them.