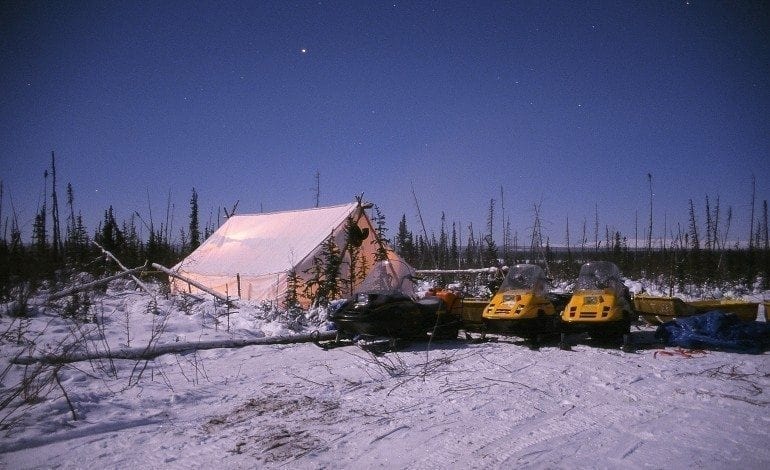 During the height of the fur trade in the 17th and 18th centuries, some 200,000 beaver pelts a year were sold to the European market, mostly for beaver felt top hats. Today, the very best cowboy hats are still made from beaver.

After 400 years of commercial trading, there are, overall, more furbearing animals today than back when Europeans came to North America. In fact, there are more beaver in Canada than anywhere else in the world. Once near extinction in some parts of North America, wild mink population have rebounded due in part to pelts supplied by mink farming. Trapping is used for species reintroductions, for example B.C. and Yukon trappers are credited with helping re-establish lynx in Colorado. Trapping is used to protect other species by curbing predation, resulting in greater survival rates for prey species. Trapping is also used for wildlife conservation research.

Thanks to effective conservation policies today, Canadian furs only come from abundant species and absolutely no endangered or threatened species are used.

Canada’s fur trade contributes nearly $1 billion  to the Canadian economy, and more than $800 million in exports . (2013)

In addition to cash income for trappers and their local communities, many Canadian families rely on beaver, muskrat and other wild animals for food. Although no statistics are kept for so-called “country foods” they are considered to have a significant economic replacement value.

Canada’s fur ranchers are mainly multi-generational family farms that contribute to rural economies like any other farming enterprise. Ranch-raised pelts bring in over $280 million in farm sales (2013) Today’s fur trade supports tens of thousands of Canadians living on the land and those working in secondary trades.

Farmed fur associations have sponsored or contributed to Canadian research and developments in furbearer health, nutrition, behaviour, housing and management. . The Canadian Centre for Fur Animal Research operates out of Dalhousie University. It is a centre of excellence that carries out and facilitates education, as well as research and technology development in a number of areas related to carnivorous, fur-bearing animals. Its partners include government and industry groups and has a national mandate. Farmed fur research is also conducted out of the University of Guelph.

The Canadian government and the fur trade have contributed over $58 million since 1983 to research and refine humane trapping methods. This pioneering work, coordinated by the Fur Institute of Canada, also provided the scientific basis for the Agreement on International Humane Trapping Standards (AIHTS) which outlines the requirements for animals trapped for any reason including for pest and disease control.

Mink and fox have now been farmed for well over 100 years. This represents many generations of captive breeding (over 2,500 years in human terms) and these animals are now considered by animal scientists to be domesticated animals. If sent into the wild most would not survive.

Professional trappers have to be qualified and licensed to trap for any purpose in Canada.

Trapping is monitored by government biologists and furbearer managers. Each province and territory has a wildlife management plan that is met through regulations and enforced by law.

Trappers must harvest within government set limits or quotas. Harvest levels can be  adjusted both by changing the length and location of hunting/trapping seasons as well as by setting minimum and maximum limits on the number of animals that can be taken in a given season. Poaching is a crime in Canada.

Under provincial/territorial regulations, only scientifically tested and approved traps for named Canadian species may be used.

According to animal scientists, measuring and interpreting distress levels in any animal, including people, is complex and difficult. Scientific data on the affects of trapping on furbearing species is limited but the research that has been done to measure the behaviour and physical responses of different species showed that most animals tested were 1) only moderately stressed by a trapping experience, 2) that stress indicators may vary but none appeared life-threatening.

Research with some species such as squirrels, rabbits and fox has also shown that stress, although not normally excessive in either case, may actually be more acute in cage traps than limb holding traps.

Today’s traps are also less likely to cause injury and discomfort. The use of modern soft-catch (padded) limb holding traps or encapsulated (enclosed) foothold traps together with mandatory trap line inspections significantly reduces injuries and resulting animal discomfort and distress.

Experienced trappers say that under proper circumstances most wild animals caught in limb holding traps only make efforts to escape until they realize that they are securely held and will then settle down. This observation is supported by the existing research.

Rarely will an animal attempt to injure itself in a cage trap or restraining limb holding trap. This may occur in rare situations where a trap has been used improperly or illegally.

The first step in becoming a trapper is to take a course in fur management. Subjects include; population dynamics, biology, regulations, trapper safety and humane trapping techniques.

Trappers must pass an exam to get his or her provincial/territorial trapping licence. In Canada, a trapper’s license is required to practice trapping for any reason including for pest and disease control and for wildlife conservation.

Most farmers raise animals because they enjoy working with them. However, farming is more than a way of life. It is also a business and a fur farmer’s livelihood depends on producing high quality pelts.

Just as with our household animals, the condition of a furbearer’s coat is one of the clearest indications of the care it is receiving. Poorly cared for animals produce poor quality pelts which receive a lower price at auction, if they sell at all.

Fur farming is also well regulated both through provincial laws, Best Management Practices and Codes of Practice. This helps ensure fur farms are environmentally responsible and provide healthy, safe conditions for the animals.

In some provinces fur farms must be licensed and all Canadian farms are subject to provincial animal and environmental protection laws.

Canada ranks third in the world for fur production, behind the United States and Russia, but first for the quality of furs produced. Buyers from around the world attend Canadian fur auctions and marketing events each year.