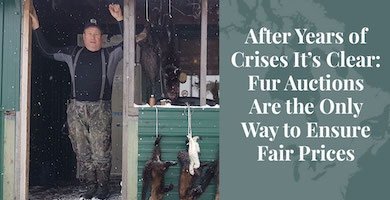 I have been employed in this business from the fur auction end since the early 1980s and as a trapper earlier yet. The first real crisis I personally witnessed in this business happened in the mid-1980s when the Ontario Trappers Association (OTA) went through a major shift in new directors being voted in at the annual trappers convention. Out of that the new board hired Price Waterhouse to develop a new management platform for the OTA fur sales service. When the dust settled, it saw Alex Shieff resign after 20 years at the helm as captain of a real success story, OTA, which he played a major role in building.

A multi-tiered management team was put in place with people being hired with no history in the trade. It was during this time of great unrest and turmoil that the Hudson’s Bay Company (HBC) formed Trappers International Marketing Service (TIMS) and set up a warehouse directly across the road from where Fur Harvesters Auction (FHA) remains today.