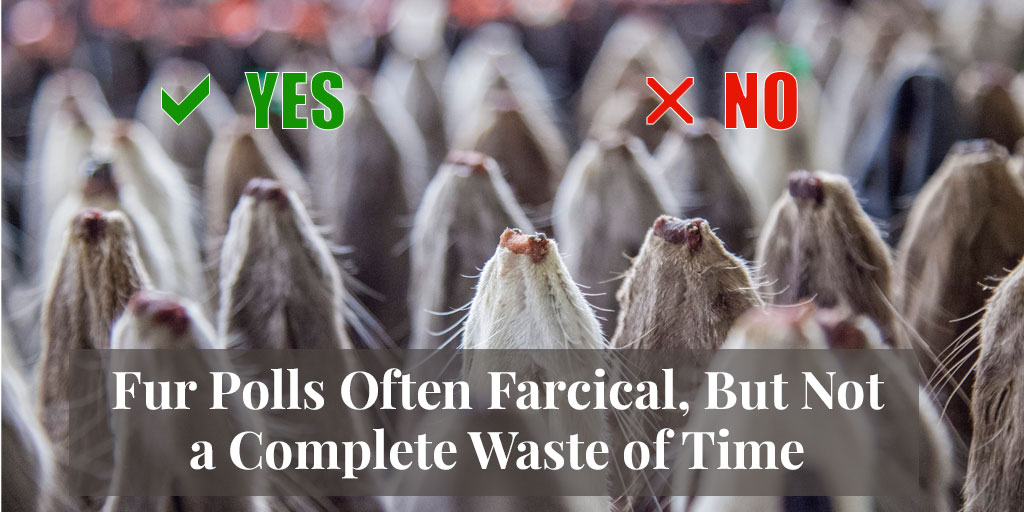 “The value of on-line polls about fur is debatable, but Truth About Fur will keep playing along. The time required to vote is minimal, we’ve yet to hear of any poll being used for malicious purposes (like phishing), and while fur polls are certainly not life-changing, they may be beneficial.

In case you’re unfamiliar with how most of these polls work, a typical one starts life as follows. The owners of Website X decide to launch a poll to generate more traffic for their site. Their motive for doing this can vary; maybe they want to make more money from advertising, or increase their ranking in Google searches. Remember, though, that the last thing on their minds is what you think. They don’t care. All that matters is that you vote, and that you get all your friends to vote too.

So they pick a divisive subject like, “Do you agree with wearing fur or not?” with the potential to generate lots of knee-jerk votes. They then kick back and wait to see who finds their poll, hoping it will be both pros and antis.

If PETA et al. find it first, they spread the word, and votes opposed to fur come flooding in. The fur trade then gets wind, and starts voting to try to get their side of the story across. Pretty soon, a full-scale voting war is under way, and the owners of Website X congratulate themselves for a job well done. They then launch a new poll on whether marijuana should be legalised, or Taylor Swift’s hair looks better short or long.

There are variants on this theme, of course, like posting positive or negative reviews on a business’s Facebook page to affect its star rating. Such was the experience of a Vancouver restaurant in 2017 when it added seal meat to its menu. It was immediately bombarded with one-star (lowest possible) reviews from around the world by animal rights activists, and its rating plummeted. Friends of sealing then countered with positive reviews, even though, like the animal rights activists, most had probably never visited the restaurant. It was a farce, but what else could one do? (The only other defence for a business targeted by activists is to disable its review function, at least temporarily.)”