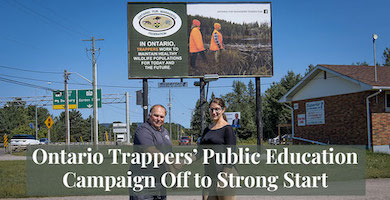 A billboard campaign by Ontario trappers to raise public appreciation of their role in wildlife management has so far been well received. Now the organisation behind the campaign, the Ontario Fur Managers Federation (OFMF), is optimistic a national campaign can follow.

From September 5 to October 14, the OFMF has six billboards on show near high-traffic border crossings to the US. The message on the billboards is simple, but thought-provoking: “In Ontario, trappers work to maintain healthy wildlife populations for today and the future.”

The idea, explains Robin Horwath, who retired this August after 12 years as OFMF’s general manager, is that discussion of this key message will lead to discussion of other important aspects of trapping. These include protecting habitat, property and infrastructure, controlling the spread of diseases, and of course, supplying consumers with beautiful, sustainable and natural furs.