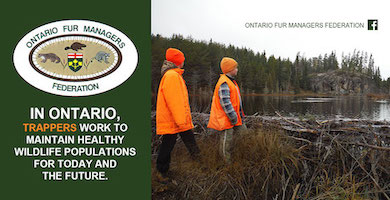 Hoping that trapping associations across Canada will be inspired to follow suit, the Ontario Fur Managers Federation (OFMF) is launching a billboard campaign to raise public awareness of the roles trappers play in wildlife management and pest control. It also hopes to correct misunderstandings about trapping created intentionally by animal activists.

Animal rights groups have long been spreading falsehoods about the trapping of furbearers, in particular that it is unnecessary and cruel. Trappers have defended themselves, with support from wildlife managers, conservationists, and consumers who appreciate the unique qualities of fur. However, some people – in particular those living in cities with limited access to nature – continue to be misled by activist misinformation. It is against this backdrop that the billboard campaign kicks off this September.

In the first wave of the campaign, the OFMF will erect six billboards at border crossings between Ontario and the US, strategically selected for their heavy traffic. (Slow-moving drivers have more time to look!)