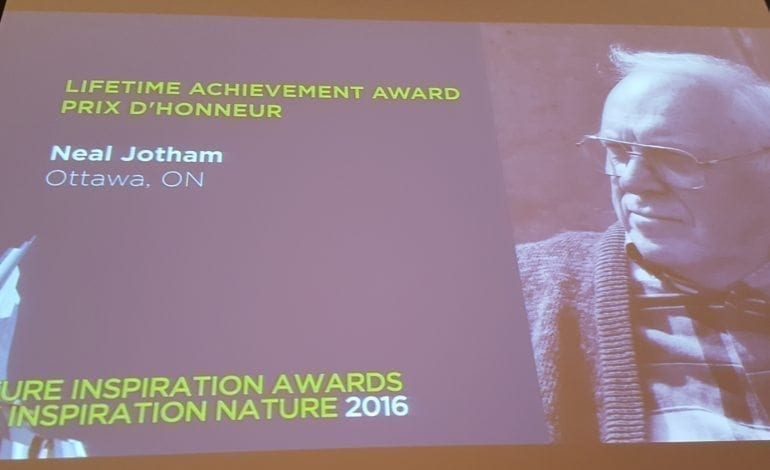 Neal Jotham is one of the found fathers of the Fur Institute of Canada and has played an important role in the fabrication and implementation of the Agreement on International Humane Trapping Standards (AIHTS). He has played a central role in Canada’s world-leading trap research and testing for the past 50 years. He has spent his time promoting animal welfare but also promoting the people in the industry who do these great outdoor activities. From his time at the Canadian Association for Humane trapping to Canadian Federation of Humane Societies to his time at the Fur Institute of Canada, he has always been a leader in the goal of improving animal welfare aspects of trapping.

On November 9th, 2016, the Canadian Museum of Nature host there 3rd annual Nature Inspiration Awards. “The Nature Inspiration Awards recognize individuals and organizations that, through their work or specific projects, encourage Canadians to take an interest in natural history, create links with nature and contribute to its preservation.” As described on the Canadian Museum of Nature’s website, Neal Jotham embodies everything written here. He has worked his entire life to improve Canadians’ understanding and methods in trapping and by doing so has play an integral role in preservation and conservation of both a traditional industry like trapping and the welfare of the animals.

It was with great honour that the Fur Institute of Canada be a part of a great night for Neal Jotham who has made a lasting impression on the outdoor community. The evening was a moment to reflect on the past and with many like-minded individuals attending the event it was praise from the many distinguished attendees that made this award special for everyone involved.

Neal even took an opportunity during his acceptance speech to challenge the crowd by asking them, “How many of you think humane trapping is an oxymoron?” Not many raised their hands but a few did and that demonstrated the need to further inform them all. Neal took the opportunity to tell them how he took the issue of humane trapping and reminded everyone that trapping and traps in general if done correctly are always keeping the animal’s welfare in mind.

From the Fur Institute of Canada, we extend our congratulations to him and all the other winners of the 2016 Nature Inspiration Awards.

For more information on the Canadian Museum of Nature’s annual Nature Inspiration Awards and see the full list of winners please visit their website HERE .