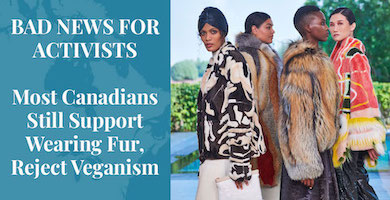 A major new public opinion poll shows that, despite decades of aggressive and misleading activist campaigning, most Canadians are still fine with wearing fur and other natural clothing materials — but are increasingly worried about the environmental costs of petroleum-based synthetics that activists love to promote as “vegan”.

The survey of 1,500 Canadians was commissioned by the Natural Fibers Alliance, and conducted in August 2022 by Abacus Data, a leading public affairs and market research consultancy.

The research completely contradicts animal activist claims that fur is no longer socially acceptable. In fact, two-thirds (65%) of Canadians believe that wearing fur is acceptable so long as the industry is well regulated and animals are treated humanely. Only one in five (21%) of Canadians do not agree – with just 10% saying they “strongly disagree”.