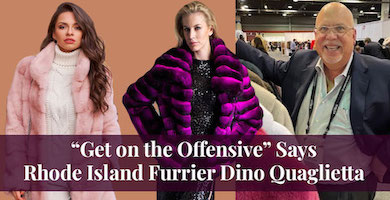 The proposed fur ban in Rhode Island has been defeated. The bill, HB7361/SB246, which, if passed, would have banned the retail sale of fur, was defeated last week when the Rhode Island legislature convened.

Even in light of the industry being outspent by the Animal Legal Defense Fund, the Humane Society and other groups, as well as a digital campaign and the overwhelming support the bill received in the house, it was not enough to get the bill passed.

Dino Quaglietta of Northeast Furs, a local retailer in Warwick, has been engaged in fighting the ban since it was first proposed. Upon learning of the ban’s defeat, Quaglietta said, “It’s great that we won, for sure! It was a hard-fought battle. Good news for Rhode Island, but outside of the industry, who knows about this?”