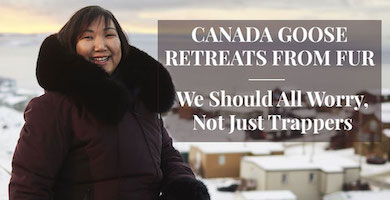 The recent news that Canada Goose would stop trimming the hoods of its performance parkas with coyote fur by the end of 2022 disappointed and angered many trappers and others in the fur trade. But anyone who cares about nature and democracy should be worried too. Here’s why.

First, despite the rhetoric of animal activists and the chatter of some media pundits, it’s clear that the company’s decision to retreat from fur was not driven by consumer trends or evolving societal values. Canada Goose has offered parkas with and without fur trim for years, but thousands of young people continue to choose the iconic coyote ruff – as you can see on the streets of Montreal, Toronto, New York, London, Paris, and other cities as soon as the thermometer dips each fall.

The real reason for Canada Goose’s retreat from fur is clearly because the security, PR, and other costs of responding to relentless protests from animal activists simply became too much to bear. No clothing brand has ever been subjected to such aggressive campaign tactics. Store invasions, social media barrages, even noisy protests in front of CEO Dani Reiss’s home – Canada Goose held strong through it all for more than a decade. But the company’s extraordinary success in making fur cool for hip young consumers singled them out as a primary target for increasingly aggressive activist attacks.