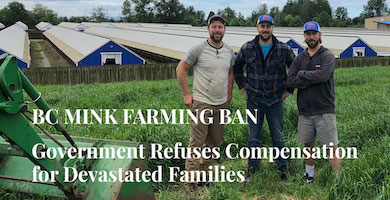 British Columbia’s Ministry of Agriculture, Food and Fisheries has yet to show any science to justify its drastic decision, last November, to introduce a mink farming ban in that province. The failure to provide any serious evidence that mink farming might compromise efforts to combat Covid-19, as the government – echoing animal activists – claimed, raises questions about its real motivation. Even more alarming, the government has refused any compensation for the farm families whose life work and livelihoods have been wiped out.

Rewind to July 2021. After three of BC’s nine mink farms had tested positive for Covid-19, the Ministry of Health drafted an order imposing a moratorium on any further breeding. Since the order would expire in January 2022, before the start of the next breeding season, it did not constitute an immediate threat to farms. But the possibility that the order might simply be extended made planning impossible. So the farmers objected, and the final order instead just prohibited them from increasing the current size of their herds.