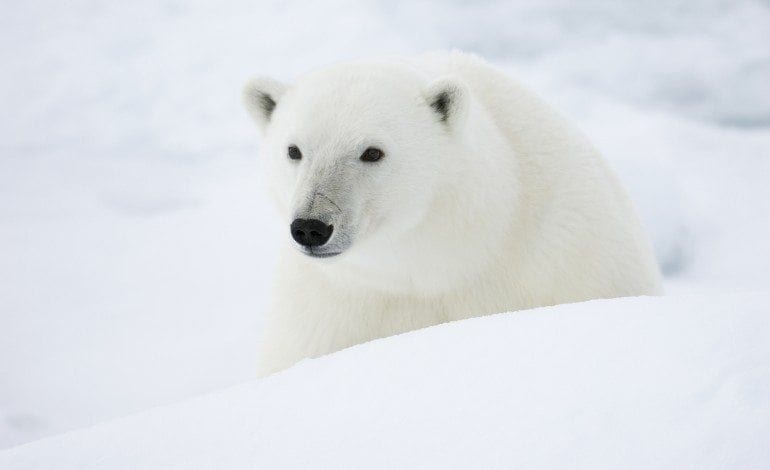 Polar Bears are not currently threatened with extinction and the regulated harvest does not pose a threat to the survivability of the species.1

Today, the primary conservation concern for Polar Bears is habitat loss and reduced access to their primary prey due to climate change, not harvest. 2

The Canadian population is made up of 13 subpopulations distributed among 13 management units.

The Polar Bear was listed as a species of Special Concern in November 2011 under the federal Species at Risk Act (SARA). In Canada, Polar Bears are protected through a collaborative approach that is shared with provinces, territories and regional wildlife management boards. This allows activities, investments and expertise to be coordinated across the country. 5

Around 600 or 3% of the Canadian Polar Bear population are killed in Canada annually under a limited hunt, mostly by native Inuit hunters. 6  Quotas are established for each management unit designed to keep harvests at levels the bear population can sustain. Hunting is prohibited in units experiencing or threatened with population declines.

The Native people of the north have long hunted Polar Bears. For the Inuit and many northern communities, polar bears are especially significant culturally, spiritually and economically.   Polar Bear hunting plays a central role in long-held traditions and also provides food and fiber for traditional lifestyles. Hunted bears are fully utilized. Canada’s indigenous Inuit people also argue trade in Polar Bear pelts is one of their few economic resources.

In Canada the hunting and harvest of Polar Bears is restricted to Aboriginal people or sport hunters guided by Aboriginal people who harvest by traditional means and in accordance with sound conservation practices based on the best available scientific data. 7

Polar Bears are mainly hunted by residents of the north. Each village gets a number of tags allowing hunters residing there to take the number of bears the population can sustain. In some regions, local people can choose to “sell” some tags to sport hunters. That is, they guide a non-resident hunter out on the ice to hunt bears and they allow that non-resident to shoot the bear they might have otherwise shot. Typically, such “sport” hunting results in the take of fewer bears because the sport hunters are normally not as successful as the local hunters. This practice provides added economic benefit to local economies obtained through non-resident hunters. 8

Since 1976, management has been coordinated internationally under the Agreement on Conservation of Polar Bears, which was signed by the federal government as well as by the four other countries where Polar Bears are found (Greenland, Norway, the United States, and Russia). This agreement prohibits unregulated sport hunting of Polar Bears and obliges each signatory to conduct research on the conservation and management of the species and to convey the findings to the other member nations. 9

A system of sustainable harvest management has been in place in Canada since the 1970s. Harvest quotas are established by the governments of the jurisdictions together with wildlife management boards established under Land Claims Agreements. Local quotas are established for the purpose of long-term conservation of Polar Bears. Canadian quotas include all human caused mortalities: subsistence harvest, non-resident hunting, known illegal take, and take in defence of life and property. Reporting of all take to jurisdictional conservation officers is required. 10

For now, some populations may still be safely hunted.

In Manitoba, Polar Bears have been protected under the provincial Endangered Species Act as of 2008, and hunting or trapping of bears is not permitted.

In Ontario, the Polar Bear has been protected under the province’s Endangered Species Act since 2009. Only First Nations hunters residing along the Hudson Bay and James Bay coast can harvest Polar Bears. There is a permissible limit of no more than 30 bears per year.

In Québec, the Polar Bear has been listed as Vulnérable under the Loi sur les Espèces Menacées ou Vulnérable since 2009. The James Bay and Northern Québec Agreement (1975) restricts the taking of Polar Bears to Aboriginal peoples and ensures that they have exclusive access to a Guaranteed Harvest Level of a maximum of 62 bears per year, or less, dependent on sustainable use estimates.

In Newfoundland and Labrador, the Polar Bear has been listed as Vulnerable under the Endangered Species Act since 2002. Labrador Inuit having exclusive rights to harvest 6 bears/year (males and females without cubs) under a quota system along the Labrador coast.

In the Northwest Territories, the Polar Bear was listed as a species of Special Concern in 2014 and a management plan is currently in development.

In Nunavut and the Yukon the Polar Bear is not listed, but comprehensive and responsive management systems are in place. 11

World-wide, Polar Bears are currently listed on Annex II of the Convention on International Trade in Endangered Species (CITES), as Vulnerable allowing tightly restricted trade. All trade in products from that species requires a CITES permit. Trade is regulated and monitored but not banned. 12

Canada is the only country that permits the export of Polar Bear parts, from a limited number of subpopulations. About ½ of those killed (approximately 2% of the Canadian Polar Bear population) end up in the international trade and exports from Canada have not increased over the years.  13

Polar bears are listed as a threatened species under the US Endangered Species Act and the import of polar bear parts into the U.S. is prohibited.

Harvest in excess of established quotas: In cases where there are concerns regarding the sustainability of harvest levels, coordinated management actions by jurisdictions and their partners, including the adjustment of quotas for each management unit, should reduce or remove the threat of unsustainable harvest. Canada currently invests approximately $1.7M/year into monitoring its Polar Bear population to ensure that quota determinations are based on recent data.

Contaminants: As a top predator, Polar Bears are exposed to environmental contaminants that have effects at the individual, and possibly, at the population level.

Human-bear conflicts: Increased interaction between humans and Polar Bears is already occurring in northern communities; further human-bear conflicts are likely to arise in the future as tourism and other human activities increase, and sea ice continues to change. Human-bear conflicts may result in the destruction of property, danger to people and danger to bears due to human-caused harassment, or mortality in defense of life or property. 14