We would like to take this opportunity to provide members with highlights and important information from the Fur Institute of Canada’s 33rd Annual General Meeting held in Yellowknife, Northwest Territories from June 23-26, 2016. The meeting was attended by professionals from the private and public sectors, including wildlife control operators, trappers, fur farmers, wildlife biologists, municipal officials, aboriginal organizations and others.

The Annual General Meeting was held on Saturday, June 25th, 2016 and was followed by an evening banquet, where attendees heard from keynote speaker, Premier Bob McLeod of the Northwest Territories. Premier McLeod is a tireless advocate of sustainable use, and a former board member of the FIC who was part of the group that established and negotiated the Agreement on International Humane Trapping Standards (AIHTS). The AIHTS is the only international agreement (between Canada, Europe, Russia — and the United States by a separate understanding) that guarantees trade based on proven animal welfare standards.

We would also like to thank our generous donors who provided a range of quality items for our successful live auction, silent auction, and raffles. Thank you to all FIC members and guests who attended this year’s events and to our sponsors, and volunteers who helped make our AGM a resounding success. 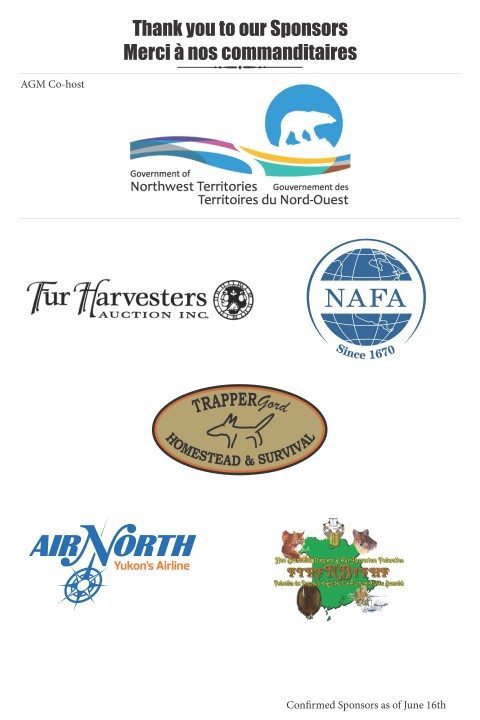 The Fur Institute’s 2016 Strategic Session, “Stewards of the Land and Water – Addressing Climate Change” was well attended by trappers, wildlife control operators, trapper organization representatives and officials from all levels of government. Chaired by the FIC’s Past Chairman, David Hutton, the purpose of this years’ Strategic Session was to strengthen the stewardship role of Canada’s trappers in tracking and documenting climate change impacts across the country and in advocating for practical solutions.

The keynote address was delivered by Ernie Campbell, Deputy Minister of Environment and Natural Resources for the Government of the Northwest Territories. Presentations followed on trappers as stewards, climate change impacts on wildlife health and furbearer abundance, as well as emerging research methodologies that may improve the effectiveness and efficiency of furbearer research. Equally important, the attendees were able to learn from experienced northern trappers about the changes that they are observing on the trap line, changes that have been carefully noted over decades of living on the land and are increasing understood now to be climate-change driven. Through this series of presentations and subsequent breakout group discussions the Strategic Session participants gained a deeper understanding of the impacts of climate change on Canada’s furbearers, trappers and the trapping sector, as well as Canada’s current response this global challenge.

All the speakers reinforced a common message – the growing and widespread concern about existing climate change impacts and the need for the fur sector to adapt to current and anticipated longer term changes. In addition to discussing the growing role of trappers in addressing climate change as stewards of the land and water, attendees also identified the core elements of a possible sector-wide adaptation plan, from the trap line to the retailer.

The sessions provided attendees new ideas that they could take home and use while giving an appreciation of what trappers and sealers are doing collectively to promote a responsible and sustainable trade for today and for the future while at the same time adapting to the impacts of climate change on their operations, furbearers and markets.

We would also like to thank all our speakers, moderators and participants who contributed to a successful and important discussion on Stewards of the Land and Water – Addressing Climate Change.